Before I dive in, a bit of forewarning: this has been written at the peak of the off-season and I’m missing hockey! Secondly, as a big Belfast Giants fan, I may (probably will) show a little favouritism for the Teal Army.

It might sound a bit contrived to say that I think there is a tonne of PR and social media inspiration to be found from a sports team in any field (or rink). Of course they’re going to get great social media engagement, media coverage, create fun and imaginative content; they’re pushing at an open door with thousands of dedicated fans desperate for the latest news and team updates.

Just because they’re pushing at an open door though, doesn’t mean we can’t find inspiration from them – in this instance, ice hockey in the UK. So stick with me and keep on reading…

What PR lessons can we learn from the ice hockey?

There are so many great examples of brands using social media – whether it’s everyone’s favourite, Innocent Drinks, or the slick, professional GE. There’s inspiration to found left, right and centre – and for me that includes with the Giants too.

Although their social media is by no means perfect, they are clearly getting something right, being ranked top for their digital reach in the Elite Ice Hockey League (EIHL) in March 2017.

The Giants share content that their fans care about – whether that’s game updates, news of the latest podcast, player announcements or even just things that make people laugh (like this tweet, joking with American ice hockey team Florida Everblades about NHL great Jaromir Jagr). It’s something all brands can take on board:

The average attendance at EIHL games last season was 2,842. For the Giants alone attendance averaged at 4,603. That’s not a small number and ice hockey is growing in popularity in the UK.

Despite these numbers, there traditionally hasn’t been a lot of media attention into the sport. Recent achievements – and an eye for a great PR angle – have really helped to change that. 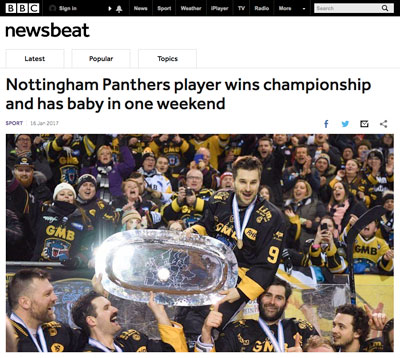 The Nottingham Panthers did wonders for the profile of the sport when they won the Continental Cup at the start of this year. And they did a brilliant job of making sure the media knew about it with national TV and radio features, and this great story about player Alex Nikiforuk nipping home for the birth of his son.

This brilliant story about a young ice hockey player also hit the headlines in March and we can’t miss out the brilliant determination of the Manchester Storm in getting Justin Bieber on their ice – not once but twice!

This PR shouldn’t be underestimated – either in its benefit or the hard work put in to achieve it. Each of these stories took a creative mind-set and angle to make them work and each of them will have played a significant role in raising the profile of ice hockey in the UK.

Align sponsorships with your brand 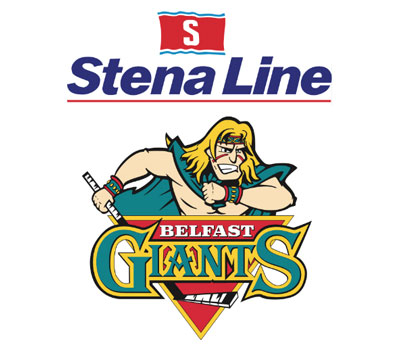 Sponsoring a sports team can be a fantastic way to raise awareness for a brand. Turn the tables and a sports team gets great value from a well-aligned sponsorship too. The Giants have benefitted for many seasons from ferry operators, Stena Line, sponsoring the team. It brings funds into the club and it’s also tied to providing fans with transport to England and Scotland for away games.

Brands can take away from this the importance of choosing sponsorships wisely – take into consideration what you want to achieve and the added extras you could leverage from any sponsorship opportunities. Of course, you do hear stories where bad moves by teams, players or athletes have potential to reflect badly on sponsors too, so make sure you continuously review your sponsorships and whether it is right for your brand.

Don’t depend on the sponsorship alone, maximise your money and make it benefit your wider marketing activity. I’ll give you a break from the ice hockey for a minute to use an example from my football team of choice instead: Plymouth Argyle sponsors, Ginsters, showed the huge benefit of PR and sponsorships going hand-in-hand when they presented Jurgen Klopp with a giant Cornish pasty after Liverpool’s FA cup win against the Greens.

Think creatively and outside of the box when it comes to getting the most from a sponsorship and you could tick a lot of PR boxes.

Champion what matters to your audience

Ice hockey teams are brilliant at demonstrating the value of championing causes that really matter to their audience (their fans). The Giants are a force for community engagement in Northern Ireland, with key team members embarking on lots of activities with schools, local fundraisers and much, much more.

The key learning for brands here is to champion what matters to your audience – whether that’s your customers, employees or other stakeholders. If you are looking to support a charity, increase community engagement or improve trust in your brand, then you’ll want to make sure you’re supporting causes that resonate with who you want to reach.

All in all, this great PR, and passion, is doing wonders for the sport. Yes, there is still a long way to go with ice hockey in the UK with there being some reputation management slip ups and various arguments about the structure/management of the league showing there is still room for improvement. But the fans are something else and, in the most part, the teams really have got the puck in the net when it comes to great PR. 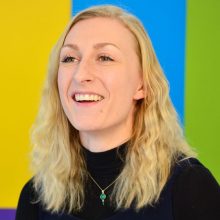 An English graduate from the University of Exeter, Louise has worked for PR agencies in London and Leeds, with in-house marketing roles at Merlin Entertainments and Care.com.

Loving the challenge that comes with spanning both digital and more traditional marketing channels, Louise has a CAM Diploma in Marketing Communications and is an Associate of the CIM.

An avid ice hockey and football fan, Louise spends many of her weekends supporting her teal and green teams. In the off-season, you’ll find her shaking off those match day nerves with yoga and outdoor bootcamp classes!